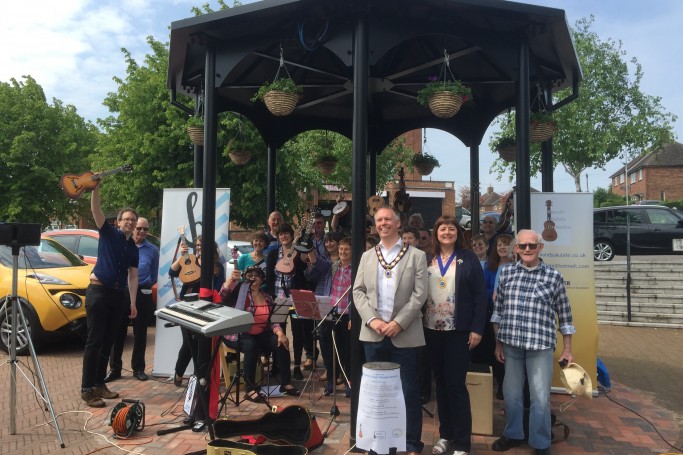 On Saturday 26th May Cllr Lee Wilkes, Deputy Mayor of Raunds and Chairman of the Environment, Leisure and Recreation Committee, was delighted to officially open the Covered Seating Area on The Square in Raunds.

The facility will host a series of events during the year, including performances from local groups and bands, face painting and much more. The programme kicked off with performances from Different Direction Choir and Raunds Ukulele Orchestra.

Cllr Wilkes said: “It’s wonderful to see The Square being used as a real community space. We hope this will help bring our residents together, it’s somewhere where our local groups and clubs can perform and raise funds and also a place just to meet friends and take a seat.”

After the event, Different Direction Choir posted a video from the event on Facebook and said: ‘We were delighted to be the very first group to perform in Raunds’ new covered seating area. Fantastic weather and a lovely opening speech. Thank you to all who came, supported or worked so hard to be a part of it!’

A local resident attending the event said: “It’s great to finally have a focal point in the town for community activities.”

The Covered Seating Area, which has been fully funded through grants and contributions from local developers, is part of a wider plan to make improvements to The Square. These include the introduction of planters, a digital noticeboard and new play equipment. All the works will be completed during the summer.

Following the opening, Raunds Community Choir led a singalong on The Square on Tuesday 29th May.

A council spokesman said: “If any other groups or clubs would like to use the space then please do get in touch with us at the council offices, we would be happy to assist and can provide a PA system for your performance. We look forward to hearing from you!”